Hydrogen molecule (together with its isotopologues) is the simplest molecule in nature. As a four-body system, molecular hydrogen is subject to most physical phenomena relevant to the chemical binding in more complicated molecules. It is also the only neutral molecule which can be calculated to a high precision. 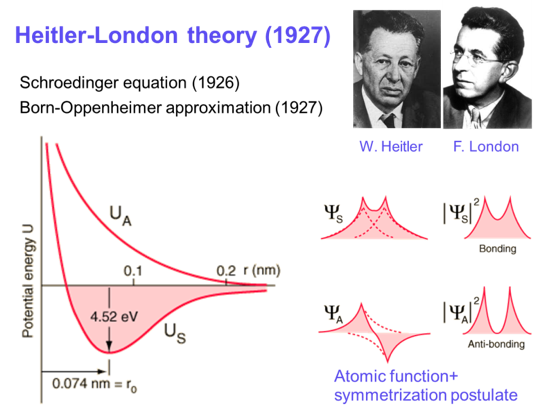 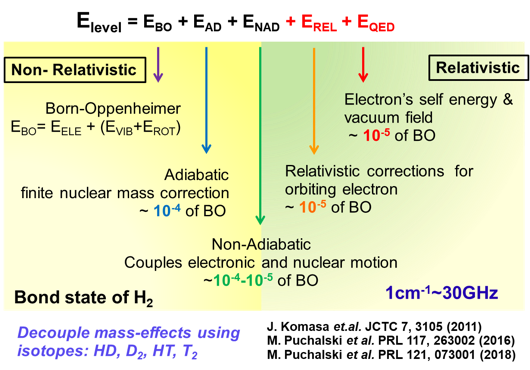 The pioneering calculations of Heitler and London on H2 demonstrated that molecular binding is a consequence of quantum mechanics. In almost a century of mutually stimulating activities by experimentalists and theorists, the quantitative understanding of this molecule goes into a new precision. Significant progress in the theoretical calculations has been achieved, where relativistic and QED effects were explicitly included. The most accurate spectroscopy measurements of the molecular hydrogen, combined with the most accurate calculations, would allow for tests of the fundamental physics and also determination of the fundamental physical constants, for example the dimensionless proton-to-electron mass ratio.

In the past decade, we focused on the precision measurements on hydrogen molecules, aiming to test quantum electrodynamics in such a four-body system. In 2012, we determined the frequency of an electronic quadrupole transition (second overtone of vibrational transition) of H2 to the 9th digit, which was the most accurate at that moment. In 2017, for the first time, we obtained Doppler-free Lamb-dip spectrum of an overtone transition of HD using cavity-enhanced saturation spectroscopy referenced to frequency combs, and compared its frequency with high-level calculations to the 10th digit. Although there were discrepancies among the available experimental and theoretical results, it offers an opportunity to determine the proton-to-electron mass ratio. By collaborating with Dutch and Swiss physicists, we developed a chirp-reduced vacuum UV laser and improved the dissociation energy of H2 to an unprecedented precision. Further improvement of this value will open a new window to the determination of the proton charge radius, contributing to resolve the “Proton Size Puzzle”. 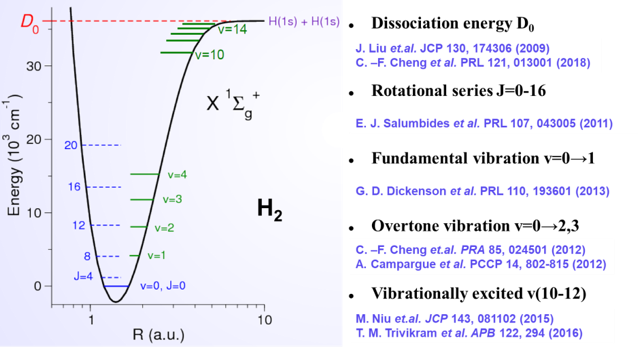 Now, we can foresee further improvements on the precision spectroscopy of molecular hydrogen. Using frequency stabilized mid-IR lasers, low-temperature cavities and molecular beams, we aim to determine the infra-red transition frequencies of molecular hydrogen to an accuracy of 10-10 or higher. As this stage, it will allow us to determinate the proton-to-electron mass ratio, and even to search new physics beyond the Standard Model.