The neutral helium atom, with only two electrons, can be theoretically understood to a high degree of precision. As a result, it is a good bound quantum system for testing QED. Among its transitions, 23S1-23PJ (J = 0, 1, 2) have a relatively small natural linewidth (1.6 MHz) and have been well studied with the accuracies of both calculations and measurements reaching kHz and sub-kHz, respectively. Also, the fine-structure intervals among 23PJ states, up to 20 GHz, can be used to determine the value of the fine structure constant α. 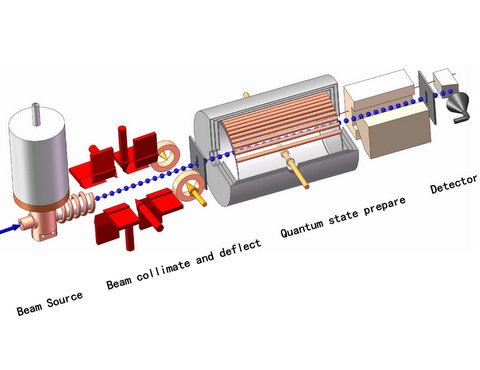 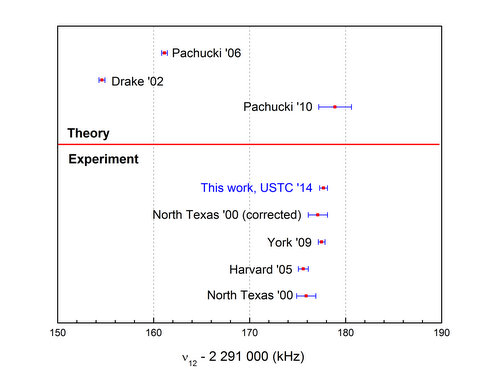 Fig. 2 Comparison of the ν12 (The 23P1-23P2 interval) values from experimental and theoretical studies.

We have built a system as shown in Fig. 1. In this work, transverse laser cooling, 2D focusing and optical pumping are used to produce an intense atomic beam of 4He in a single spin state of the metastable 23S1. The spectral probing is accomplished in a well shielded space, isolated form the noise of the surrounding electric, magnetic, and optical fields. The 23P1-23P2 interval, determined from the difference of the frequencies of 23P1- 23S1 and 23P2-23S1, reaches an accuracy of 0.36 kHz. This is the most precise laser-spectroscopy measurement of the interval [Feng 2015,Hu 2009] (Fig. 2). Its result is in agreement with both the latest QED-based calculation by Pachucki and Yerokhin [Pachuchi 2010] and the most precise measurement conducted with microwave spectroscopy by Borbely et al. [Borbely 2009]. It also agrees well with the corrected laser spectroscopy measurement of Castillega et al. [Castillega 2000] and Marsman et al. [Marsman 2012]

We plan to measure the fine structure splitting of 23P0-23P2, and the absolute frequencies of the 23S1-23PJ transitions of both 4He and 3He. These measurements will be used to test QED, determineαand the nuclear charge radius of 3He.