An intrinsic electric dipole moment (EDM) of an atom signifies the violation of both parity (P) and time-reversal (T) symmetries. It may originate from CP violation of the constituent electrons the nucleus. Under CPT, a symmetry regarded to be more fundamental, T-violation is then equivalent to CP-violation. In the Standard Model, the atomic EDM is extremely small and undetectable under today’s technology. However, various extension models, including Supersymmetry, Multi-Higgs or Left-Right Symmetric Model, generally predict a much larger EDM value that could be detected in the current- or next-generation experiments. Results of EDM measurements can be used to constrain these extension models and search for new physics beyond the Standard Model at the TeV energy scale. It is particularly important to understanding the mystery of matter-antimatter asymmetry in the early Universe. 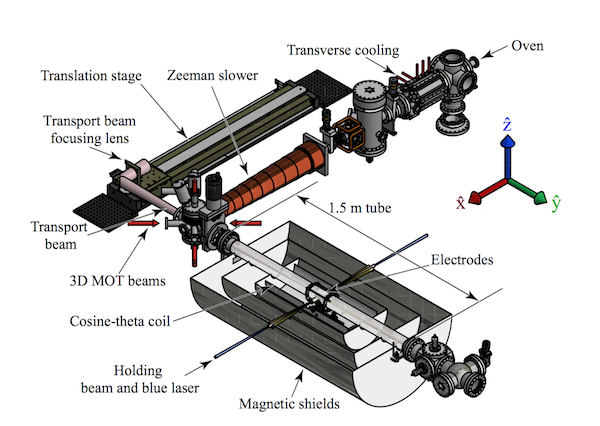 Fig. 2 A diagram of the experimental apparatus with important sections labeled.(by M Bishof) 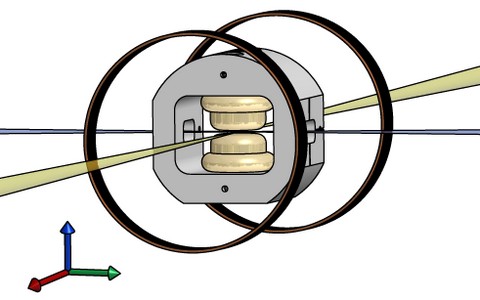 In the experiment, 225Ra atoms are first captured into a magneto-optical trap (MOT), and then laser-cooled and transferred into an optical dipole trap, which is used to transport the cold atoms into a region of a uniform, weak magnetic field and a strong electric field. The atoms are polarized and allowed to precess freely. Any difference between the two precession frequencies, measured while the electric field is parallel or anti-parallel to the magnetic field, is the sought-after EDM signal, along with many possible systematic effects that need to be tracked down and eliminated.

Ytterbium-171 (171Yb) is a stable isotope with atomic properties and transitions similar to those of 225Ra. It is particularly useful as a proxy for testing various measurement schemes and investigate systematic errors. Moreover, future high-precision measurements of 225Ra EDM need to use 171Yb as a co-magnetometer for the purpose of correcting effects of magnetic field noise.

Fig. 1. EDM violates time-reversal symmetry. When time is reversed, the spin direction is reversed, but the EDM direction remains unchanged. If an atom possesses both spin and EDM, then the time reversal operation produces a measurable difference in the atom.